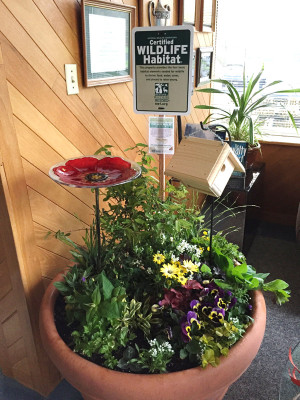 Gail Moll of Rohsler’s Allendale Nursery & Florist recently created two lush container gardens that will act as microhabitats for butterflies, and help inspire others to plant the nectar and host plants favored by butterflies. The gardens were commissioned by Subaru and are being displayed at the Subaru dealership on Kinderkamack Road in Emerson and at Subaru’s corporate headquarters in Orangeburg, New York as part of the Butterfly Heroes program.

Gail planted her portable butterfly gardens in 31-inch containers. After carefully considering her options, she selected just under two dozen appropriate plants that are now at their best.

The Disney Conservation Fund is also supporting the NWF effort as part of its mission to protect the planet and help kids develop lifelong conservation values, and Botanical Interests is the official provider of seeds in the kits participants receive when they make a formal pledge to become a National Wildlife Federation Butterfly Hero. 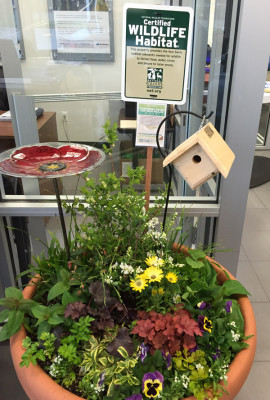 To join the Butterfly Heroes Campaign, submit a photo of yourself making the international sign language sign of the butterfly at NWF.org/ButterflyHeroes. (A photo of a girl making the sign appears when you log on to the website.) Participants who take the pledge will be mailed a free kit (while supplies last) and, if entered by June 1, 2016, are eligible for a chance to win a trip for four to Walt Disney World in Orlando.

The population of Monarch butterfly populations was at one billion as recently as 1996, but numbers have declined as much as 90 percent in recent years, a result of numerous threats, particularly loss of habitat due to agricultural practices, development, and cropland conversion. Degradation of wintering habitat in Mexico and California has also had a negative impact on the species, though numbers in Mexico showed signs of a small rebound this winter. Monarch habitat decline is indicative of the stressors other butterflies, bees, and all pollinators are facing.

Monarchs are currently migrating north through the United States. They will need to find plenty of Milkweed along the way in order to survive. Butterfly gardens are a great way to provide sustainable habitats in small spaces.

Planting Milkweed or nectar plant seeds provides essential elements of butterfly habitat: food, water, cover, and a place for Monarchs to raise their young. Add a water source — such as a birdbath filled with pebbles or mud for pollinators to land on to get a drink — and your Butterfly Hero garden will qualify as an official National Wildlife Federation Certified Wildlife Habitat and will also be counted as part of the Million Pollinator Garden Challenge. www.millionpollinatorgardens.org.