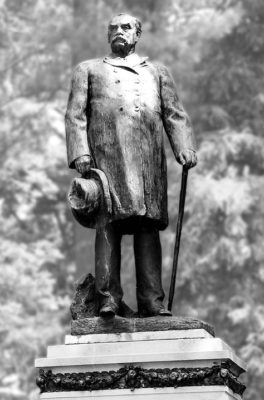 A pioneer who moved to the American West in 1854 ultimately moved the West, East, North, and South to plant millions of trees.

In 1854, Morton married Caroline Joy French in Detroit, and the two traveled to what is now the State of Nebraska. Their new home was a 160-acre expanse. It could have been a dream-come-true – had there been even ONE tree on the property!

Morton’s days were chiefly spent working as editor of the “Nebraska City News,” but he made time to plant thousands of trees, shrubs, and flowering plants on his land. He took his message to individuals and civic organizations through newspaper articles and speeches touting the benefits of planting trees, and even trying new crops.

His message was extremely well received. Other pioneers missed the treed landscapes from their previous homes, and recognized the need to plant trees as windbreaks. They also understood Morton’s message that trees:

On January 4, 1872, Morton made the proposal that would become his legacy. He suggested the establishment of Arbor Day at a meeting of the State Board of Agriculture. The celebration was almost called Sylvan Day, but Arbor Day – a more inclusive term – was selected. Sylvan refers to forest trees, but Morton wanted his observance to encompass the planting of fruit trees and ornamentals.

Amidst the fanfare, an estimated 1,000,000 trees were planted on that first Arbor Day!

Governor Robert Furnas proclaimed Arbor Day for Nebraska in 1874. The celebration became a legal holiday in Nebraska in 1885, and Morton’s birthday was selected for the observance.

Additional states followed suit during the 1870s. New Jersey’s Arbor Day is the last Friday in April. (Please visit the Outreach section to read about the Rohsler’s staff installing a tree at the John Fell House.)

Due to our country’s vast differences in climate, other states have adjusted the timing of the celebration to coincide with their ideal planting times.

Morton’s legacies also include his two sons, Joy and Paul. Paul served as Secretary of the Navy under Theodore Roosevelt. Joy established the Morton Salt Company.

The Morton family home, a 52-room mansion built to resemble the White House, is now a state park and arboretum.