Invite Royalty into Your Garden

Perennial Of The Week: Dendranthema/Hardy Chrysanthemum

Roll out the red carpet for Emperor of China and Cambodia Queen. These are two of the five knockout varieties of Rohsler’s Grown Dendranthema that are now awaiting a place of honor in your garden. The other, equally regal varieties are Sheffield, Mei-Kyo, and White Bomb.

Dendranthema (sometimes called Dendranthemums) are hardy, perennial Chrysanthemums that will perform year after year with some basic care. At one time, Dendranthema fell under the genus Chrysanthemum; however, in the early 1960s, that genus was divided into Dendranthema, the hardy garden mums; Leucanthemum, which includes Oxeye and Shasta daisies; and Tanacetum, which includes Feverfew, Painted Daisies, and Tansy. Chrysanthemum (Maum, for short) remains the common name for the “florist Mums” that are omnipresent when autumn arrives, and are often treated as annuals.

The lobed foliage of the Dendranthema is appealing, but the prolific daisy-like blooms that appear in late summer and fall are the undeniable reason gardeners pursue this plant with unbridled enthusiasm.

Dendranthema seek full sun (approximately six hours) to partial shade, and are generally easy to grow. Moist, rich, well-drained soil will help these plants do their best although they are extremely drought tolerant. Trim old foliage and deadhead spent blooms to encourage a lengthier display of floral fireworks. Dendranthema are undaunted by light frosts, and will continue to bloom until the first hard frost arrives.

As the weather turns cooler, watch the weather with an eye toward the first hard frost. Before the ground freezes, water your Dendranthema well. Afterward, add a layer of mulch or simply rely on naturally fallen leaves to accumulate around the plant.  Fallen leaves serve as organic mulch and the various leaf colors provide an aesthetically pleasing ground tapestry.

In the spring, watch for early buds, and pinch back any growing tips until July 4. Pinching your Dendranthema will produce plants with a tidy habit, and will encourage a preponderance of flowers in the fall. If you forget to pinch your Dendranthema, the plants will still flower, but you will want to pay special attention to deadheading to extend the bloom time.

Now, more about our five offerings, which you will find in the terra cotta pots that bear our signature Rohsler’s Grown logo:

Emperor of China is a show-stopper with its full, shimmering pink flowers. This variety can get quite tall (three to four feet), so plan to stake these plants, or pinch the tips as described above to encourage a shorter plant.

The low-growing (8” tall) White Bomb has a prostrate habit, and makes an excellent groundcover. This variety looks most like a Daisy, with its large white petals surrounding vibrant yellow centers.

We’re sure you’ll love Dendranthema for its ability to attract butterflies and its tendency to last as a cut flower. Whether you plant yours in a border, a cottage garden, a rock garden, or a cutting garden, well-tended Dendranthema will delight for years to come! 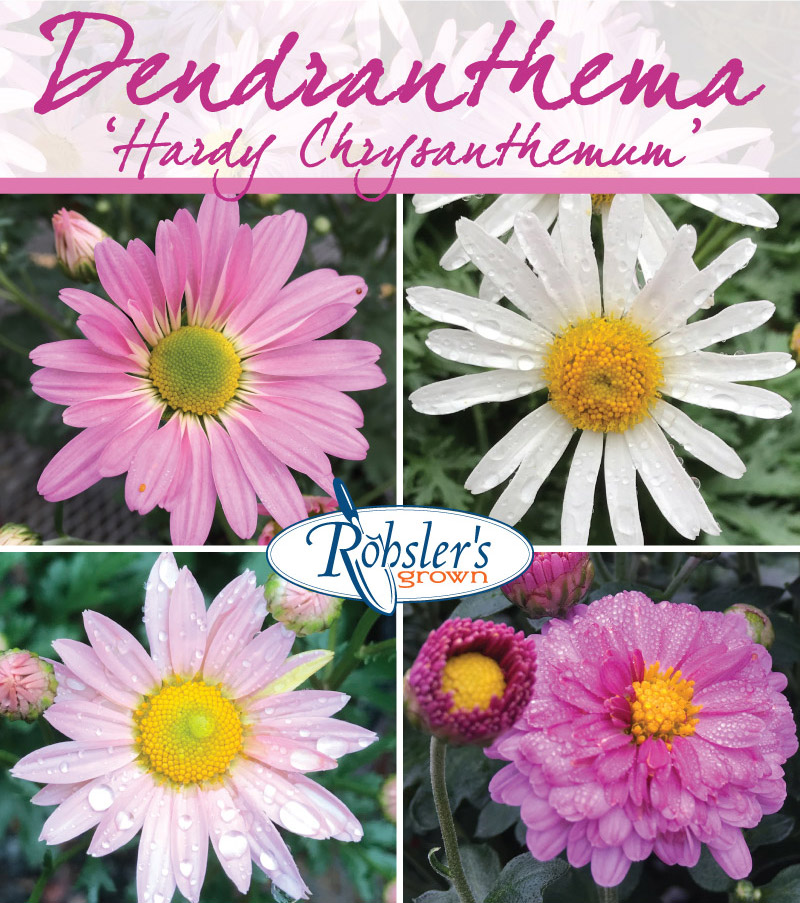