PLANT OF THE WEEK – Epimedium 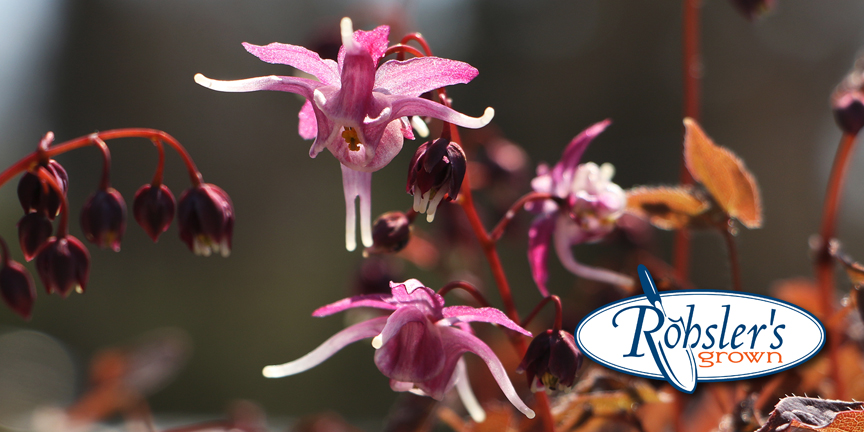 An underused and long-lived perennial workhorse for the shade garden, Epimedium or Barrenwort is this week’s featured Rohsler’s Grown Perennial of the Week. Epimedium grows as a ground cover, spreading slowly to moderately from underground rhizomes making it capable of colonizing large areas. It can also be used in smaller groupings and makes an excellent plant for the edge of a planting bed. It is very deer and animal resistant thanks to its robust, spiny foliage, and a slew of other chemical compounds within it. Occasionally called Horny Goat Weed it is also used medicinally for many ailments and as an aphrodisiac. Legend has it that a goat herder noticed these properties after his goats munched on a substantial stand…. let us hope the deer continue to steer clear as we already have plenty of them! As for now the scientific research on its medicinal properties is somewhat mixed and inconclusive so we would not recommend trying it out. Barrenwort has many ornamental attributes, including uniquely textured foliage and colorful juvenile spring foliage often in red, purple and occasionally chartreuse. Quite often, the emerging leaves in the spring will also be mottled or speckled in other shades. As their new spring foliage is emerging occurs,  flower stalks simultaneously emerge and bloom creating a striking combination. Flowers color varies by variety offering an incredible range of colors from yellow, orange, red, pink, purple, white and even multicolored. The shape of the flowers can often resemble a spider or bishop’s cap. Many varieties have spectacular red or purple fall color as well. Some varieties are evergreen, remaining green throughout the winter!
Epimediums are not too fussy as long as they do not have very wet feet. They prefer evenly moist soil high in organic matter with good drainage . The more vigorous varieties handle periodic drought and dry shade admirably as well, once established. Another surprising plus is it will thrive well in alkaline soil conditions where many other plants will perish.
Plant it in the shade garden in combination with ferns, hellebores, sedges, shade grasses, and azaleas. Given its low spreading habit it compliments nearly anything well. Because Epimediums can often be hard to propagate and are initially slow growing, they can fetch a somewhat higher price. Do not let this deter you, as it is a plant capable of long-term garden investment. It is also currently 20% off and locally grown at our nursery so take advantage of these significant savings while supplies last!