Perennial Of The Week: Dianthus

Dianthus, Greek for “divine flower,” is one of the world’s oldest cultivated flowering plants. The desirability of Dianthus has led to some 30,000 cultivars, including the Carnation (D. caryophyllus), Sweet William (D. barbatus), and the Pink (D. plumarius).

Why are some forms of Dianthus called Pinks?  Ask and you’re liable to start a lively debate. Some say the flowers borrowed their name from their most common color. Others say “pink” – a verb that refers to the creation of a perforated or punched pattern – describes the fancy outer edges of the flower’s petals. (Think of pinking shears, here.) Another story tells us that “Pink” was derived from pinksten (or pfingsten), the German name for flowers that bloom at Pentecost.

Don’t dwell on the controversy. Accentuate the positive! There is a variety of Dianthus for every sunny garden. Small and compact Sweet Williams make excellent border plants, and bloom in a wide cluster that is generally bi-colored. Other mid-height and tall Dianthus varieties add interest to the landscape with thick, gray-green linear leaves and stems that send up spectacularly ruffled flowers in white, pink, and red – some of which have striking markings.

Dianthus delights whether it produces single or double flowers, since both forms scent and color the garden and lend their graceful, long-stemmed beauty to indoor spaces as long-lasting cut flowers.

The clove-like scent of Dianthus led the Spanish to use these flowers to add spice to their beverages. These days, chefs infuse whipping cream and poaching liquids with Dianthus. Several moth and butterfly species also find Dianthus delicious.

Grow your Dianthus in full sun in fertile, well-drained soil. If your soil tends toward the acidic side, add a bit of lime to produce a more alkaline soil. Remember to keep your plants deadheaded, and, with a little care, you’ll soon be able to divide your plants.

We are currently growing seven fine varieties of Dianthus. Be sure to look for them in the terra cotta pots that bear the Rohsler’s Grown logo.

Neon Star is a diminutive delight at just 6-8” tall. This plant’s silver-blue foliage grows in a compact habit, and its bright cerise flowers are eye-catching and fragrant.

Kahouri, a veritable giant at 8-12” tall, is a top performer that pays dividends of rose-pink blossoms.

Firewitch may be small at just 6” tall, but gardeners gravitate toward this variety for its magenta blooms.

Sugar Plum is tall and breathtaking. This variety’s blue-green foliage grows 10” tall and its striking, ruffled blooms are red with frosty-white edges.

Fire Star commands attention for its red blooms and dark, intense “eyes.” This cultivar reaches 8” in height, but makes a dramatic statement.

Stop by today and get acquainted with all of the varieties of Rohsler’s Grown Dianthus. We enjoy growing vigorous, top-performing plants just for you, and never mind if you rake in the compliments for adding them to your landscape or garden. We’ll see you soon. 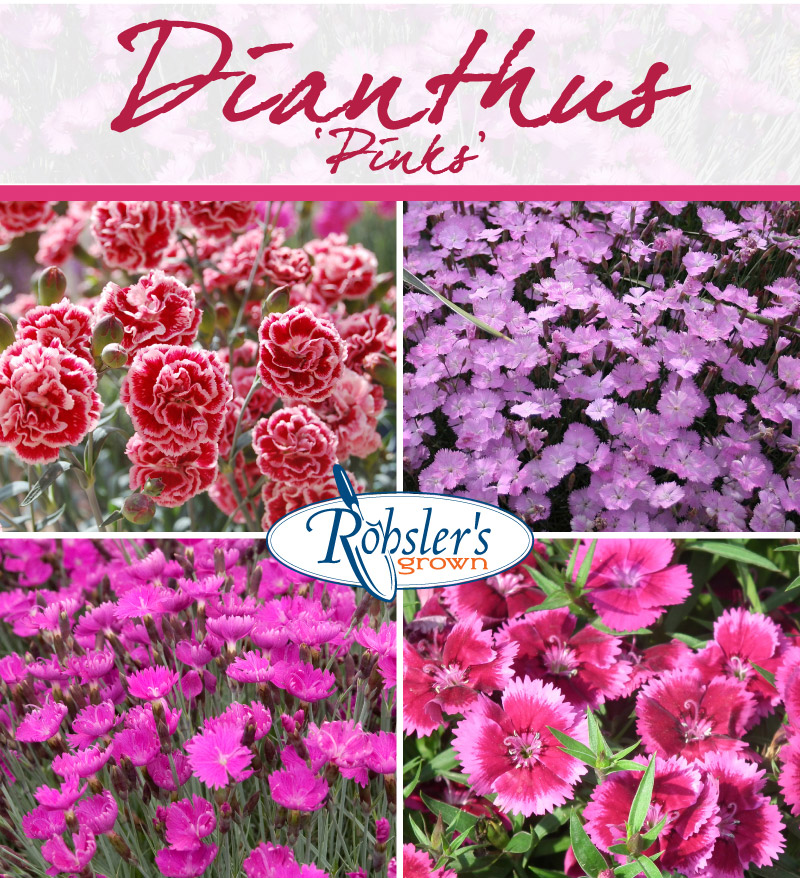